In this day of specialization, it may seem counterintuitive to learn that some of the most successful people – across a span of professions – are generalists in many areas and were slower to specialize in just one during their formative years.

This is a valuable insight for educators – found in a new book by David Epstein titled, Range: Why Generalists Triumph in a Specialized World. 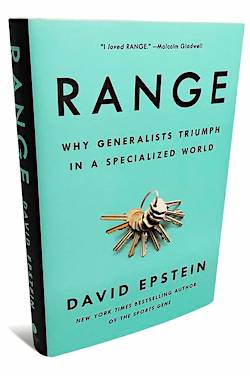 Epstein is a journalist by trade and a self-proclaimed individual with “range.” He is also a very good storyteller. He begins his explanation of range by telling a tale of two athletes: Tiger Woods and Roger Federer. Tiger began playing golf almost before he could walk. His skill development was carefully managed by his father and he clearly became one of the best golfers in history.

Federer, on the other hand, loved playing lots of sports. Rather than specialize early, his sampling of a variety of different games provided options and time to specialize later. Only as a teenager did he begin to focus exclusively on tennis.

In contrasting these stories about Woods and Federer, Epstein points to many elite athletes who choose Federer’s path:

…they undergo what researchers call a ‘sampling period.’ They play a variety of sports, usually in an unstructured or lightly structured environment; they gain a range of physical proficiencies from which they can draw; they learn about their own abilities and proclivities; and only later do they focus in and ramp up technical practice in one area .(p. 7)

We might jump to the conclusion that this concept is true only for athletes, but it has a much more general application. Epstein describes a wide range of individuals ranging from educators to scientists who sample a variety of activities throughout their lives. And, he reinforces his point with this fascinating factoid:

“Nobel laureates are at least twenty-two times more likely to partake as an amateur actor, dancer, magician, or other type of performer.”  (p. 33)

Why is range so important now? Epstein cites the new challenges that rapid growth in technology has spurred. More often than not, we’re faced with problems that don’t have easy answers. To address these challenges requires what Harvard’s Ron Heifetz calls adaptive expertise, which enables people to apply what they know to challenging new problems that don’t have obvious solutions.

In this 7-minute video, you can listen as Epstein discusses some of his insights
about Range with author Malcolm Gladwell (including comments on “early readers”).

Connection to Teaching and Learning

It is at the conjuncture of knowledge acquisition and application that Epstein’s message applies directly to education. With information doubling every two years, students must learn how to learn (metacognition) and to apply their knowledge to many different situations. Yet too many schools are still structured to teach students through worksheet activities, memorization, and the use of simple formulas, which do not provide the opportunity for students to think deeply or struggle with learning. 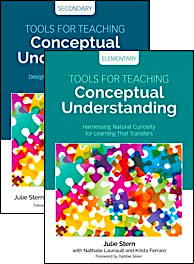 Building adaptive expertise in students requires students to think more, grapple, and revisit complex concepts using “distributed practice” or “spacing.” Revisiting complex concepts from time-to-time can move learning from short-term to long-term learning, making it more durable and retainable. (More about this in my upcoming review of the breakthrough book Tools for Teaching Conceptual Understanding – later this month.)

Changing education practice to enhance adaptive expertise faces many challenges, one of which Alabama has confronted recently during the adoption of new math standards. The standards require students to both come up with the correct answer and explain how they got the answer to a specific problem. This represents a major shift from procedural math (“I followed the algorithm”) to conceptual math, or teaching students how to understand the process. This shift to conceptual math helps teachers better diagnose student mistakes and allows students to begin to understand and master complex mathematical problems.

It is only when a student understands the process – which takes time and what is sometimes described as  “productive struggle” – that they can become proficient at mathematical problem-solving.

But, as Epstein notes, this change in the way experts say we should teach math is often uncomfortable for parents – the vast majority of whom learned procedural math by memorizing formulas, often at the expense of deep understanding.

…parents are like ‘Lemme show you, there’s a faster, easier way.’ If the teacher didn’t already turn the work into using-procedures practice, well-meaning parents will. They aren’t comfortable with bewildered kids, and they want understanding to come quick and easily. But for learning that is both durable (it sticks) and flexible (it can be applied broadly), fast and easy is precisely the problem. (p. 85)

The Wisdom of the Crowd

Another intriguing concept that Epstein details is the “wisdom of the crowd.” He tells story after story of scientific teams that are the most successful because they are comprised of a collection of people possessing a variety of expertise. In fact, studies found that often “the further the problem was from the solver’s expertise, the more likely they were to solve it.” (p. 178).

As Epstein notes, “Knowledge is a double-edge sword. It allows you to do some things, but it also makes you blind to other things you could do.” (p. 179)

Epstein makes his point about the value of range through the many case studies and stories told throughout the book, but he doesn’t give the reader THE answer to successfully harnessing range. He suggests avoiding comparing oneself to others more successful right now, and instead focusing on the potential ahead of you. He points to Michelangelo as an example – and individual willing to “learn and adjust as you go, and even to abandon a previous goal and change directions entirely should the need arise.” (p. 290).

With all these insights about range in mind, Epstein emphasizes that he is not suggesting we abandon specialization and a focus on mastery of a particular skill or field. He concludes “there is nothing inherently wrong with specialization. We all specialize to one degree or another, at some point or other.” (p. 290). 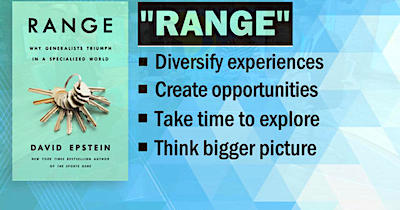 Pick up a new hobby; read a genre of literature not familiar to you; surround yourself with people who have different interests, and you too can strengthen your range. Most important, think about how these insights into the important connections between range and learning might support innovations in the way we educate the developing thinkers in our classrooms.

For further exploration, see this article at the Next Big Idea Club: