The slide on the screen stressed the importance of developing self-directed individuals by “conveying a valued person from where s/he is to where s/he wants to be.” That’s what those of us who were participating in the first of four Cognitive Coaching retreats learned about cognitive coaching’s purpose and our roles as CC coaches in training.

Earlier this month, 40 educators gathered at Children’s Harbor on Lake Martin for a two-day retreat to introduce us to Cognitive Coaching. Developed by educators Robert Garmston and Art Costa more than thirty years ago and still going strong, Cognitive Coaching helps the coach put the “coachee” into the metaphorical driver’s seat. 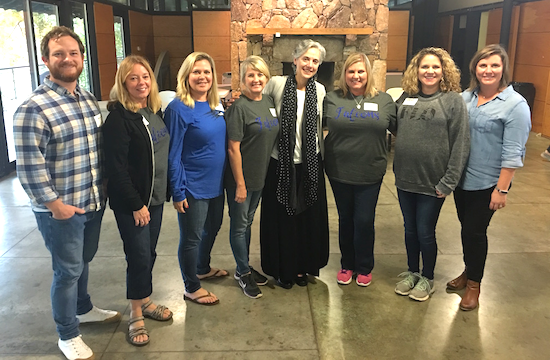 In Alabama, when someone mentions coaching, the image of a football coach probably comes first to mind—particularly in the fall. A cognitive coach, while using some of the skills of a Nick Saban or Gus Malzahn, is more of a sounding board and thinking guide.

Cognitive coaches may possess expertise in a variety of areas. When they coach, however, instead of giving advice or sharing expertise, they deploy communication and listening skills to help their “coachee” decide upon the next course of action.

I’m not even close to being a proficient cognitive coach, and I’m looking forward to the three additional retreats. I’m also committed to learning—and practicing—more. For those of you who aren’t ready or able yet to go through eight days of training, there are some shareable skills that you can put to immediate use.

When you are in dialogue with someone, you expect that other person to really listen to you. Or, put another way, you expect to be heard. One of the best ways to validate that you heard your conversation partner is to paraphrase what was just said.

To effectively paraphrase, one has to listen intently and in a focused way to ensure that you both hear and understand the other person. That requires suspending our inner voice, which might be urging us to plan what we are going to say next. Instead, a good paraphraser listens with the intent to understand and strives to succinctly share what they heard that other person say.

This is not easy. Humans are easily distracted. And, let’s face it. We like to talk…a lot! And, our favorite topic to talk about is ourselves and what we think!

So paraphrasing requires discipline, commitment, and practice. And that leads us to a closely related second cognitive coaching skill… 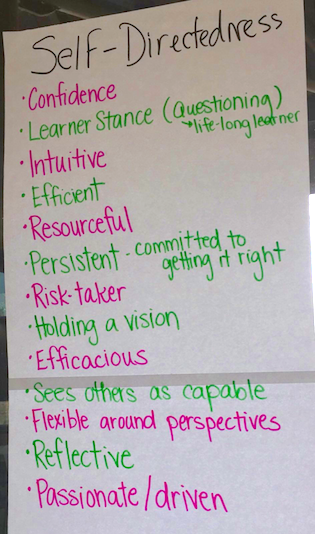 Think back to a time that you feared pauses or silence. Might have been a first date, an interview, or meeting someone you admire for the first time. If you are like me, you felt the urge to fill every moment with a pithy comment or question to avoid the dreaded silence.

Yet, silence—at least for a short time—can be golden! Pausing allows the person talking to add on to their comments. Being committed to pausing before you speak allows you to form your response instead of “tuning out” during the ongoing conversation so you can plan your next comment. Pausing helps both participants become more reflective and have more productive conversations.

But, it’s so hard! If you are in a small group, you might be afraid that by pausing you are going to “lose your turn” to speak. You might fear that people think you tuned out or are aloof. Or, you might just be so engaged in the conversation that you can’t wait to add another point or ask a question.

Something surprising can happen when you practice pausing. It invites the other person to say more. It gives you time to think and rethink and perhaps become more articulate. At least for me, it is a more peaceful and productive way to have a conversation or dialogue.

Your body language during a conversation or dialogue can often speak louder than your words. For example, one of my pet peeves is when I notice someone with whom I’m talking look over my shoulder to see who else is in the room. Whether intended or not, it signals to me that time with me is not very valuable to them.

Another point: our tone of voice can send a mixed message if we’re trying to share a compliment or praise while sounding gruff, mad, or bored.

Even our posture can come into play when we’re talking with others. Crossing our arms can signal to the other person that we’re not open to them. (Note: I have to be careful about this one because I’m often cold and want to cross my arms. I’ve learned to mention the temperature to my conversation partner/s so I won’t be projecting disinterest or hostility).

When sitting, leaning slightly forward signals interest and engagement. Eye contact and affirmations like nodding show your interest. It’s important to think about all the nonverbals that we project when speaking with others. 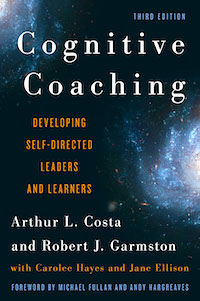 These three skills stressed by cognitive coaches – paraphrasing, pausing, and body language – can be used by anyone interested in becoming a more effective and empathic communicator. But it takes practice to make this become more automatic.

Over the next week, commit to being intentional about your use of pausing and paraphrasing. And, be mindful of what you are projecting nonverbally. You might notice that other people see a more committed and valued conversation partner.

You can find more CC Resources at www.thinkingcollaborative.com

And look over this useful Educational Leadership article about Cognitive Coaching (from 25 years ago!). It’s by CC co-creator Robert Garmston and several colleagues.