When the principal of Anniston High School abruptly resigned in September  2016, the school was in an unenviable position. The school had recently been placed on the Alabama State Department of Education’s Failing Schools List.  Assistant Principal, Mr. Charles Gregory, a retired Staff Sergeant in the United States Army and thirteen-year veteran of Anniston High School, became the interim principal for the year and eventually became the permanent principal in the summer of 2017.  Mr. Gregory and his staff quickly began making changes, one of the most important being a renewed emphasis on the instruction of students.

This change was built on the four academic tenets that formed  the cornerstones of their renewed commitment: 1) planning instruction, 2) providing instruction, 3) adjusting instruction, and 4) enhancing instruction through differentiation and personalization.  With a solid foundation established, they simply needed an instructional model that provided a rigorous and robust curriculum, challenging for both teachers and students, to move the school in this new direction.  Out of this search, a successful partnership was soon to be established. 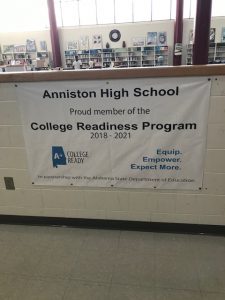 One of the most important components of this renewed focus on instruction was the Anniston City Schools’ association with A+ College Ready. Anniston High School and Anniston Middle School had been Pipeline schools with A+ College Ready since 2016;  this status continued until 2018 and enabled the majority of the staff in grades six through ten at both schools to be trained and supported on the exact type of curriculum they had been seeking. Mr. Gregory believes the partnership with A+ was a ”major component” in laying the foundation for academic growth. The rigorous new curricula “placed new demands for teachers and students to perform at a higher academic level.  We began to focus less on things like grade point average and more on the standards of the new curricula.”

When responding to subsequent parental concerns regarding a lack of emphasis upon such things as G.P.A., top 10 banquets, etc…, Mr. Gregory responded with a profound quotation from an anonymous philosopher: “The greatest enemy of knowledge is not ignorance;  it is the illusion of knowledge.” According to Gregory, the new partnership “allowed us to focus on the process of learning and knowledge acquisition that would benefit our students beyond their years at our school.”

As a result of their success as a Pipeline School, Anniston High School moved to Program School status with A+ College Ready in the 2018 -19 school year and has now begun offering AP courses to its  students. This year, the school offers Advanced Placement courses in literature, language, biology, statistics, computer science principles, government, and United States history.

In addition to introducing the rigorous curricula,  the new affiliation with A+ College Ready lead the middle-and-high schools to initiate vertical team meetings on a regular basis.  Anniston High School teachers meet weekly, and combined meetings between the middle-and-high schools take place quarterly. Ben Kochian teaches AP Language, AP Literature, and 10th grade language arts.  He praised the vertical team meetings and believes they have been vital to unification and alignment. The fact that language arts teachers in all secondary grades are now using the same language means that middle-school students are now making a smoother transition into their English courses at  Anniston High School. 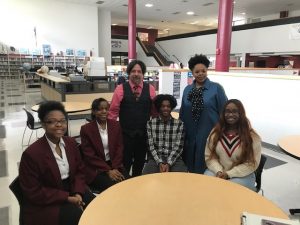 Mr. Kochian also stressed the benefits of summer training.  He said the materials and follow-up support have been vital to sustaining the momentum that began in summer training.  “The trainers were masters of their crafts,” Kocian said, “and we were exposed to some of the best AP instructors in the country.” He went on to explain the importance of  the professional connections made with other Alabama teachers he met at these trainings. Kocian concluded that “the growth of the students is obvious, and that has validated the sacrifices that the school has made.”

Tiffanie Hall teaches AP biology and introductory biology.   According to Ms. Hall, “summer training was extremely beneficial and the fall workshops were awesome.”   She was quick to point out that the new curricula required an adjustment period for parents, teachers, and students:  “The students simply were not prepared, and this was difficult for all of us.” She now sees a tremendous difference in growth, achievement, and preparation for the next level.  She stressed that the school “is not where we want to be, but we are moving in the right direction, and I am motivated to do more.”

Juniors Trinity Lockett and Halima Cochran are both taking  AP Language and AP Biology. Halima believes the depth of these courses will benefit her by providing deeper preparation for college.  Trinity believes that the critical thinking skills acquired in these much more challenging courses have helped make her a better student.  Both students had recently attended their second Saturday study session, where they took the AP Language mock exam, and both were excited about their test results, which confirmed that their increased  efforts are making a significant difference. On the basis of what their scores revealed, Tiffany is working diligently on “interpretation and a deeper understanding of text,” while Halima is focused on “rhetorical essays and reading between the lines of text.”

Tenth graders Amara Parker and Jackson Hicks are taking courses in which the A+ College Ready curricula are being implemented.  Amara stressed that the courses have really helped develop her critical thinking skills and prepare her for future AP courses. Jackson said these courses have made him “get out of my comfort zone and challenge myself academically.  I am grateful to have the opportunity to take courses of this nature.” Jackson recently saw an improvement of three points on the latest ACT diagnostic assessment offered by the school. 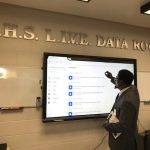 The epicenter of this instructional revival is the newly renovated L.I.V.E. Data Room. The school system transformed an old and unused room into the heart of instruction at Anniston High School. L.I.V.E. stands for Learning is Very Empowering and you can see this theme (along with other motivational messages) posted across the school. All instructional meetings are held here, and the academic growth of every student at Anniston High School is tracked at this location. Each grade has a designated Student Progress Tracker board that drives discussion and accountability, and the room also houses an interactive board that allows the most recent student data to be easily accessible to all stakeholders.

As a result of the hard work and dedication of the administration, teachers, and students, Anniston High School gained eight points on the most recent Report Card from the State of Alabama.  The average ACT score for the school has increased steadily, 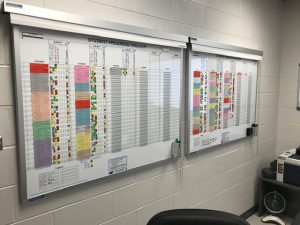 and the school is no longer on the Failing Schools list. Giving full credit to the dedication of the teachers and students. Mr. Gregory is “thankful that the culture and climate are changing and that students are now taking ownership of their own learning.  This process has been very refreshing, and we are excited about the future.”

Progress is defined as “forward or onward movement toward a destination”. Through enthusiasm, tenacity, and innovation, Anniston High School has raised the academic bar. While some would shy away from such a daunting task, the administration, faculty, and students here are to be commended for their efforts and the progress they have achieved.