Alabama is on the verge of making one of its largest education policy decisions of the next decade.

The decision will result in how more than $60 million of taxpayer money will be spent over (at least) the next five years. And, while that’s a lot of money, it’s only a drop in the bucket when it comes to the total impact of the decision. Ultimately, the decision will influence how several billion dollars in state and federal money are spent over of the next decade, if not longer. 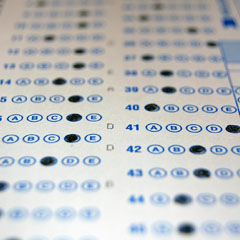 Federal law has long required all students be tested annually in English and math in third through eighth grades and once in high school. Students must also be tested in science in fifth and seventh grades, and once in high school. This was true under the 2002 No Child Left Behind Act (NCLB), and it is also true of the 2015 Every Student Succeeds Act replacing NCLB. These mandates haven’t come without controversy. Educators point to narrowed curricula only focusing on tested subjects and “teaching to the test,” while civil rights groups point to increased transparency from the test results that highlight achievement gaps and other disparities among students.

Choosing the right test (or tests) matters. More important than the federal requirement is that tests provide information to numerous stakeholders. State test results can give students, teachers, parents, communities, and policymakers important information—about how they’re doing, and what’s working or what’s not. Students, teachers, and parents can use some assessment results for feedback. Communities and policymakers can use results for determining how to allocate funding, among other things. Typically, not all of this can be done with results from one test. Formative tests given numerous times during the year provide some benefits, and summative tests given once a year provide other benefits.

For the last four years, Alabama used the ACT Aspire as its summative test, after the SBOE chose it to replace the Alabama Reading and Math Test. Using the ACT Aspire led to a more honest picture of where students in Alabama stood academically. But complaints about the difficulty of dealing with ACT as a vendor and the State Board’s refusal to provide more evidence of alignment between the Aspire and state standards to the U.S. Department of Education, among other things, led the State Board to cancel the contract. Unfortunately, the Board and Department had neither chosen a replacement nor put in place a process for choosing a replacement when they made the decision to cancel the ACT contract. (As a result, this school year Alabama will use Scantron as its summative assessment, despite its tests not being used for this purpose in any other state.)

Recently, the Committee heard from assessment experts from the National Center for the Improvement of Educational Assessment, commonly known as the “Center for Assessment.” Scott Marion and Juan D’Brot gave the group plenty to think about as they highlighted some of the tradeoffs states have to make in choosing an assessment, as can be seen in the image below. 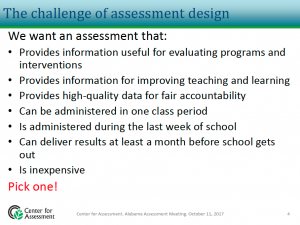 You can download the entire presentation from the Center for Assessment here.

The staff at the Center will help Alabama navigate the challenges as it works to determine what the next assessment will be.

There are other resources Alabamians can draw from, in addition to the Center’s expertise.

0 Comments on "What Will Alabama Choose as a New State Assessment?"