Yesterday the State Board of Education voted to end use of the ACT Aspire as Alabama’s annual standardized test for math and English language arts.

CLICK HERE TO read the resolution the SBOE adopted.

For the last four years, all Alabama students in 3rd through 8th grades have taken the ACT Aspire each spring in reading and math. 5th and 7th grade students have also been tested in science. Additionally, last year, the ACT Aspire replaced the previously used ACT PLAN test for 10th graders.

At yesterday’s meeting, the SBOE did not vote to adopt an assessment for next year, and right now we know few details around future plans. Clarity will come in time, but for the moment, many questions remain.

Supt. Michael Sentance indicated that the formative Scantron tests (commonly referred to by educators as “Global Scholar”) will replace the ACT Aspire for the 2017-18 school year. The interim assessment scores from Scantron tests given throughout year will be used to produce a summative test score. Longer term, Sentance has indicated he wants Alabama to develop its own assessment, much like Alabama did when students took the Alabama Reading and Math Test (ARMT).

Federal law requires states to test all students in reading and math in 3rd through 8th grades and once in high school. The Every Student Succeeds Act passed by Congress in 2015 (to replace the No Child Left Behind Act) allows states to administer several interim assessments and “roll up” the scores into one summative score instead of administering one summative test a year. 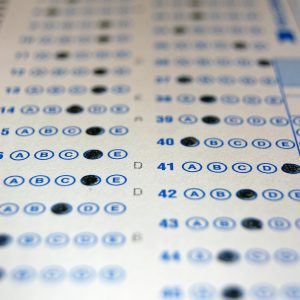 Short term, if Alabama uses Scantron tests given throughout the year to create a summative score, the scores will be “rolled up” into a summative score. This is different from with the ACT Aspire, as students took one test in the spring that produced a summative score. As of now, it’s unclear how the Alabama State Department of Education (ALSDE) and Scantron plan to make this work.

The ALSDE has offered Scantron free of charge to all districts for several years, and around 60-70% of systems use it. Other systems use different formative assessment systems. If Alabama begins using Scantron for annual assessment purposes, presumably all districts will have to use it, because federal law requires all students in a state to take the same standardized test.

Several years ago, Florence City Schools received a waiver from the ALSDE to use Scantron instead of the ACT Aspire as its annual assessment. Educators there appreciated the more frequent feedback from multiple tests throughout the year instead of one summative test at the end of the year. That bodes well for use of the tests statewide.

The National Center for the Improvement of Educational Assessment produced a report earlier this year that raises the benefit of teachers’ familiarity with interim assessments. However, there are other questions, too, about using interim tests to generate a summative score:

In Alabama’s case, it’s also unclear whether we will be able to compare ACT Aspire data from 2017 to Scantron data in 2018. In other words, will the trend line of student proficiency continue from the old test to the new test?

Whether or not this trend line continues could affect school letter grades later this this year.

The formula for calculating school letter grades relies on several factors, including student academic growth and achievement levels. If growth data for students is unavailable due to the change in tests, letter grades could be weighted more heavily in favor of schools with high percentages of students deemed proficient. 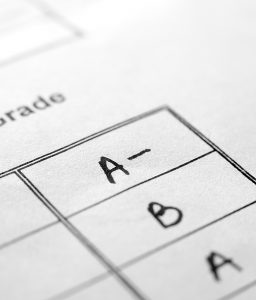 Conversely, the letter grades would ignore progress made by schools that may be lower performing overall but that might have made academic gains. Unfortunately, because there is often a correlation between academic performance and income levels in schools, and this could mean higher income schools receive better grades than lower income schools, despite how much progress the schools have actually made with their students.

Long term, the plan is less clear when it comes to Alabama’s assessments. Mr. Sentance has said he wants Alabama to develop its own test, and the general consensus is this would take at least two years to develop. That means Alabama’s new test would not be available until the 2018-19 school year at the earliest.

Nationwide, most states that develop their own tests contract with a vendor to do the work, according to this January 2017 study from Education First.

Alabama contracted with a vendor to create the old ARMT, but in Massachusetts, according to Sentance in a previous SBOE work session, the state hired staff internally to create the original Massachusetts Comprehensive Assessment System (MCAS). It’s unclear which path Alabama may choose if it decides to create its own assessment. Anecdotally, it appears contracting with a vendor is cheaper and faster than a state hiring its own staff to create a test.

Two national tests already exist that are aligned to Alabama’s academic standards. When 42 states (including Alabama) adopted their own versions of the Common Core State Standards in 2010 and 2011, two consortia of states created new assessments that align to them.

In 2016-17, seven states used the PARCC (Partnership for Assessment of Readiness for College and Careers) test, and 14 used the Smarter Balanced Assessment Consortium test. Additionally, Massachusetts and Louisiana embedded PARCC-developed questions in their state tests, and Colorado will do this next year. Michigan does the same with Smarter Balanced questions. This may present another option that Alabama could consider long-term instead of developing its own test.

Regardless of what path Alabama chooses, it’s critical that the ALSDE engage with stakeholders and experts to study the issue and come to a decision through a process that engenders confidence in Alabama’s state test and its education system. No one likes taking tests, but annual tests are an important check-up on academic progress, much like an annual check-up at the doctor is important to your health. The right test for Alabama will provide the information teachers, parents, and students need to ensure they stay on track and can graduate college and career ready. Long term, this will ensure success for the state.

0 Comments on "State Board Ditches the ACT Aspire; Questions Remain About the Future"