On Thursday the State Board of Education is expected to consider a resolution during its work session that would move Alabama away from its rigorous College and Career Ready Standards for math and English language arts that were adopted in 2010. 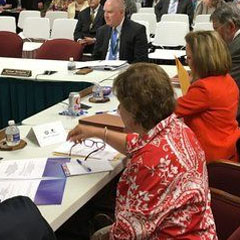 This new attempt to repeal Alabama’s standards is prompted by politics among adults in Montgomery, not sound policy, and it is not based on the best needs of students or teachers. Alabama’s academic standards have been debated ad nauseam over the years, and it’s unfortunate some politicians are still harping on a settled issue.

Please take a moment today to contact Alabama’s State Board of Education members and ask them to leave Alabama’s College and Career Ready Standards alone.

College and Career Ready Standards were adopted in 2010, and teachers began implementing them in 2012. Since then, Alabama educators and students have worked harder to meet the lofty goals of Alabama’s world-class standards based on the Common Core State Standards. Across the state, teachers and students have worked in their own classes to improve and learn at higher levels than were expected of them in the past. If you’re curious what this looks like, read this 2013 guest post post on A+’s blog from Etowah County teacher Farrah Kilgo talking about her fourth grade class.

“Finally, I feel like I’m doing what’s right for students when it comes to teaching math. Finally, my students are learning real world problem solving techniques that they’ll carry into the work force one day. Finally, I’m teaching critical thinking skills in a way that works. The CCRS are not evil, or an assessment, or some secret set of standards…”

Or, check out this post from 2015, after A+ Communications Director Jill West visited Verbena schools in Chilton County.

“In a 12th-grade English literature class, I observed a young man explaining ‘learning targets’ to parents… The ‘big’ learning target in this class was to read Chaucer’s Canterbury Tales and relate it today’s world and culture. The students jumped right in and highlighted the variety of learning tools they used help them make connections. The greeter’s classmates were dressed in costumes from Chaucer’s period, and explained in fascinating detail the medieval society and its social classes, and what they discovered to be similarities in today’s society within economic- and cultural-class divisions.”

The Common Core State Standards were developed in 2008 by a bipartisan group of governors and state superintendents who saw the need to raise expectations of students, and the importance of doing so collectively. They saw the benefit to states sharing standards (after all, math is the same in Alabama as it is in Utah), especially for teachers who want to share best practices or for children who may move across state lines during their academic career.

Despite the claims of some, the Alabama College and Career Ready Standards, and the Common Core State Standards on which they are based, are not part of a conspiracy to brainwash children or dumb-down learning. To the contrary, the standards require students to learn at higher levels than ever before, so they’ll be well-prepared to lead healthy, happy and successful lives. For more on the background of the College and Career Ready Standards in Alabama, check A+’s 2014 policy brief on the topic, which includes a timeline of standards-based education in Alabama.

To date, 42 states across the country use some version of these shared standards. Alabama educators on the Course of Study committee reviewed and adapted them to develop the Alabama’s College and Career Ready Standards in 2010. You can view the English language arts standards here, and the math standards here.

Please take a moment today to contact members of the State Board of Education and ask them to leave Alabama’s College and Career Ready Standards alone.

Letter to State Board of Ed | If You Want Our Schools & Students to Improve … Keep CCRS!