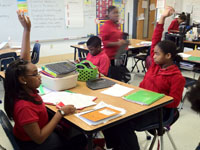 Since Congress replaced the “No Child Left Behind” Act in 2015 with the bi-partisan-supported “Every Student Succeeds Act (ESSA),” states now face the major task of writing plans to implement the new law.

“This is a big win for parents, teachers, administrators and anyone who has been frustrated by the federal intrusion in education policy,” said Alabama’s Congressional Representative, Martha Roby. (From AL.com column by Cameron Smith, 1-14-16)

States now have more opportunity for creative problem-solving for unique community challenges, to implement innovative ideas for excellence in learning and proactive measures to further educational equity no matter how under-resourced a system may be or where its students live.

The challenge for states is to take full advantage of this freedom and flexibility the new law affords them, and to make innovations a reality.

The subcommittees met for the first time June 27th, and their members were then assigned “homework” before reconvening July 22nd.

The Accountability Subcommittee reviewed the key decisions that the state will need to make under ESSA, comparing the old law with the new one, and worked to get a better understanding of the state’s requirement to establish a school “A-F” rating, or evaluation system. The subcommittee on Educator Effectiveness began by brainstorming answers to several crucial questions, like how to define an “effective teacher and leader,” and how to know if a teacher or leader is not effective.

Thomas Rains, A+’s vice president of operations and policy and a member of the Governor’s ESSA Implementation Committee, said, “It’s critical that Alabama develops a plan for recruiting, supporting and retaining effective educators across Alabama, especially in high need areas and hard-to-staff subjects like science, math, and special education.”

Since final federal regulations won’t be published until October 2016, the state subcommittee work is based on the proposed regulations that were open for pubic comment by the U.S. Department of Education through August 1st.

The Alabama Department of Education (ALSDE) has opened a public comment period, as well, which will end October 30th.  Because of the new law’s differences from previous regulations, the ESSA Committee has also scheduled a “Community Engagement Tour” beginning August 9th at Carver High School in Montgomery, to share more information on what the new law means for the state and local schools, as well as to encourage additional public comment. (Click here for tour dates and locations.)

Other states are working on similar efforts to engage the public on the potential improvement opportunities for local systems under the new law. Kentucky, an early implementer of the Common Core State Standards, recently partnered with The Education Trust to host a webinar sharing the implications of ESSA “for Kentucky and Your Community.” The webinar provided insight from experts on ways that ESSA can impact educational quality and equity in the state. Education advocacy group, One Chance Illinois, submitted policy recommendations to the Illinois Department of Education on ways they could take advantage of ESSA to expand opportunities for exceptionally gifted students.

National advocacy and policy groups are distributing numerous resources, and it can get overwhelming to weed through. The Collaborative for Student Success has launched a public-friendly website, understandingessa.org, where state-level updates can be found along with general explanations of the new law, its comparison to the NCLB, and examples of some state’s that are finding ways to incorporate its flexibility for system- and state-wide improvements.

ALSDE has launched a special website to help navigate ESSA in Alabama, including updates on the Community Engagement Tour, links to submit public comment, FAQs, and links to the Governor’s and the USDOE ESSA informational websites.