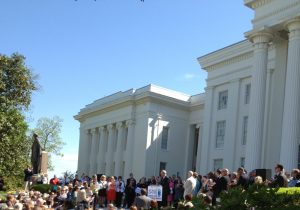 What was planned as a news conference by the Alabama State Department of Education to clarify the facts surrounding the standards’ debate, became a rally as groups from schools around the state, business leaders, PTA members, students and other education advocates held signs in support of high standards.

“Every child deserves to be challenged at the highest levels to at least have the opportunity to reach his or her full potential,” said high school student, James Allerheiligen.

“It means the potential to go from adequate to phenomenal. Why settle for ‘good enough’ when we have the best for students right now?” he said to the crowd of more than a hundred supporters.

Speakers included: Casey Wardynski, Superintendent of Huntsville City Schools; Connie Spears, member of the Madison County Board of Education; Melissa Shields, a National Board Certified Teacher from Etowah County; Susan Pruet, a board member of the Alabama Math, Science and Technology Education Coalition; Nathan Lindsay from the Business Council of Alabama; and very compelling testimony from Allerheiligen, a 10th grader at Montgomery’s LAMP High School, among others.

Dr. Tommy Bice, State Superintendent asked a poignant question during his public reiteration of the facts surrounding the creation and implementation of the state standards.

“If all of you here – students, teachers, principals, district superintendents, parents, military families, military leaders, businesses – all support the Alabama College and Career Ready Standards, then who’s left to oppose them?”

Near the end of his presentation, he also asked, “Where in the two documents that were adopted by the Alabama Board of Education can any one of the opponents’ claims can be verified?”

Senate Bill 403, an identical bill to one that was held over “indefinitely” just two weeks ago, made it through the Senate Education Committee last week. This prompted more educators and citizens to speak in support of the standards, as they were referred to as the “silent majority that was definitely heard today,” said Dr. Bice.

“These standards are vital in preparing students to compete in the 21st century global workforce which requires highly skilled workers,” said William J. Canary, President and CEO of the Business Council of Alabama, in a statement he released after the news conference. “Adoption of SB 403 and HB 565 would be a giant step backward, based on a false premise that Alabama and local school systems would lose control over their curriculum.  While some will continue a campaign of fear on this issue, we will continue to stand united in the business, education and military communities in offering our children the hope of a bright future regardless of the zip code they live in.”

The next step for SB403 would be to head to the full Senate for a vote. Legislators said during today’s news conference that they would “do whatever it takes” to prevent it from becoming law, which incited loud cheers from the crowd.

A+ will post more media from the event as it becomes available, as well as videos from around the state from Alabama teachers, demonstrating what the Alabama College and Career Ready Standards look like in the classroom.

0 Comments on "Supporters of Alabama’s Standards Crowd the Capitol"