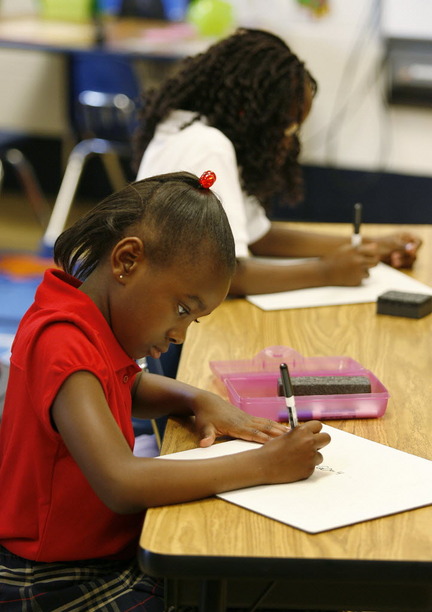 MOBILE, Ala. — Eight-year-old Caila Powell knows that she attends a good school.

But the third-grader at Collins-Rhodes Elementary School in Eight Mile said she had no idea that it was one of the best in the state.

In fact, Mobile County has five of the state’s top eight high-poverty, but high-performing schools. They were named as Torchbearers for 2010, continuing the district’s dominance in winning the award.

Even though most of its students come from families that are poor enough to qualify for free or reduced-priced lunches, Collins-Rhodes beats the state averages on reading and math tests.

Principal Veronica Coleman said students feel at home as soon as they walk in the door at Collins-Rhodes. They know they have teachers they can talk to about their problems or if they need encouragement.

“In our classrooms, you see teachers actively engaged with the students,” Coleman said, giving them models to follow and making the lessons relevant to their lives.

This is the first year for Collins-Rhodes, which opened on St. Stephens Road in 2008, to meet the Torchbearer status.

To be named a Torchbearer:

In past years, the Alabama Department of Education announced the Torchbearers in the winter or spring and gave those schools $15,000. But this year, because of budget cuts, officials said they weren’t sure any Torchbearers were going to be named.

The state released the list of Torchbearers but said no money would be awarded this time. Instead, the principals are being invited to Montgomery for a lunch later this month.

Even though Mobile County is the state’s largest school system, state officials have said the district has done unusually well with regard to Torchbearer awards.

Baldwin County has had one Torchbearer — Foley Intermediate, in 2005.

“Oh, I’m always ecstatic when that measurement comes out,” said Mobile County schools Superintendent Roy Nichols. “It really shows that we are closing the gap in student performance between the haves and have nots.”

And, he said, other districts are trying to follow Mobile County’s lead.

“It just shows,” Nichols said, “that this school system has been and continues to be on the right path.”

The other Torchbearers this year are T.S. Morris Elementary in Montgomery, Meadowlane Elementary in Phenix City and Wilkerson Middle in Birmingham.

0 Comments on "5 of State’s High-poverty, High-performing Schools in Mobile County"