Wednesday July 27, Governor Kay Ivey announced the first initiative of her administration, an education initiative.  As a former high school math teacher, perhaps it is no surprise that education is a top priority for Governor Ivey’s administration.  Her “Strong Start, Strong Finish” initiative focuses on three areas:

This was an exciting announcement for a nucleus of people in our state who have been working to expand access to quality computer science education to Alabama students.  Most of the momentum of this movement can be traced to Dr. Jeff Gray, a computer science professor at the University of Alabama, who has been a prolific National Science Foundation (NSF) grant recipient to bring professional learning opportunities to Alabama teachers who, in turn, facilitate computer science courses in Alabama schools.  Dr. Gray has personally trained over 1,600 teachers in grades K – 5 introductory lessons and strategies to begin computational thinking as early as kindergarten.  He has also secured funding that continues to provide training and support for Alabama high school teachers who are leading classrooms for courses such as the new College Board course “Advanced Placement Computer Science Principles” which was debuted in classrooms across the nation during the 2016-17 school year.  Forty-three teachers trained with funding from Dr. Gray’s grants pioneered the AP Computer Science course in Alabama. Dr. Gray has also secured funding for projects to bring computer science education to underrepresented groups such as girls, minority students and students from low socioeconomic backgrounds. Since 2011, Google CS4HS (Computer Science for High Schools) was a foundational partner in helping to build teacher interest and awareness, sponsoring multiple workshops and teacher trainings. In 2014 and 2015, Google CS4HS sponsored an online course that brought the CS4Alabama CS Principles training to over 2,200 teachers in 48 states. 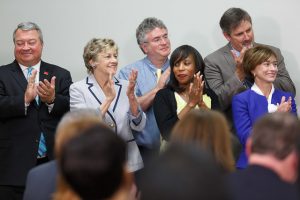 In 2015, A+ College Ready became one of the first regional partners of Code.org.  This partnership provides funding, teacher training and open source curricula to support the expansion of computer science education opportunities for ALL students.    Together, Code.org and A+ College Ready have prepared 57 Alabama teachers who will offer AP Computer Science Principles and 20 Alabama MIDDLE SCHOOL teachers who will offer Computer Science Discoveries this year.  Together, these teachers will be providing over one thousand Alabama students access to high quality computer science education opportunities this fall.  A+ College Ready is committed to collaborating with the SDE and other stakeholders to continue these training opportunities when the Code.org financial support ends next May. In addition, over 20 middle school teachers across Alabama are offering computer science courses from Project Lead the Way.

Few people know that Alabama is a NATIONAL LEADER in computer science education, and that many Alabama teachers are taking on national responsibilities in this field. An early charge in 2006 by then Computer Science Teachers of America (CSTA) President, Chris Stephenson asked over a decade ago, “What if Alabama Led the Way?” Ironically, even though the use of digital devices is ubiquitous in our society, courses and curricula that teach students computational thinking are quite rare.  The work of Dr. Gray, the State Department of Education, A+ College Ready and other stakeholders has culminated in significant achievements in the computer science education arena.

There is much work to be done!  A+ College Ready is honored to work collaboratively with Governor Ivey’s team, the State Department of Education, the Alabama legislature, Dr. Gray, Alabama’s schools, districts and teachers and other stakeholders to expand access to quality computer science education to ALL of Alabama students.