What…a…week. The 2020 election proved to be the tense, too-close-to-call, more than one night affair that many pundits predicted. In the aftermath, it might have been easy to miss the important state education races and issues that were decided Tuesday night. We’ve compiled those results here.

Alabama State Board of Education Races 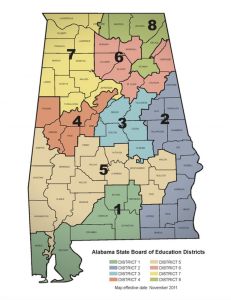 It is important to note that this was the first State School Board election since 75% of Alabama voters rejected an amendment to the state Constitution in March that would have removed the current elected state Board and replaced it with an appointed Board.

Results ushered in a new composition of the board, with two incumbents prevailing as well as two new members assuming open seats. Republican Incumbents Jackie Ziegler, first elected in 2016, and Stephanie Bell, on the board since 1994, won reelection in Districts 1 and 3 respectively.

Democratic newcomer and life-long educator Tonya Chestnut was declared the winner in District 5, which was previously held for almost 20 years by Ella Bell, who passed away in 2019. The seat is currently held by Dr. Tommie Stewart, who was appointed by Governor Ivey to fill the vacancy. Republican candidate Belinda McRae, a former K-12 educator and adjunct professor at Bevill State Community College,  ran unopposed in District 7, replacing Jeff Newman who chose not to run for reelection.

These elections matter, especially since most public school decisions are made at the state and local levels. The state board of education meets on the second Thursday of every month. To tune in to the meetings live or see past meetings, click here.

By a margin of roughly 2 to 1, Alabama voters passed an amendment that would aim to remove racist language from the state Constitution. Although public school segregation was banned by federal courts more than six decades ago, the state Constitution still includes language that requires public schools in Alabama to be segregated. The amendment authorizes the non-partisan Legislative Reference Service to organize and recompile the Alabama Constitution, eliminating all racist language along the way. The revised Constitution will then return to a future ballot for final approval by Alabama voters.

While partly a symbolic measure, the amendment’s core purpose is to ensure the Alabama Constitution reflects our state’s current core values and beliefs, especially for Alabama’s students.  Commenting on the amendment, Rep. Merika Coleman, one of the sponsors of the bi-partisan legislation remarked, “What we are trying to do with this small measure is to bring the Alabama Constitution into the 21st century and be more reflective of who we are as a state now.”

Words matter more than ever. This is one small step toward working to create great schools for every child, regardless of race or circumstance.

Of the 67 county school districts, 36 have an elected superintendent. 26 of these positions were on the ballot Tuesday evening, only 7 of which had a challenger. For comparison, all 71 city school district positions are appointed. Local school superintendents play the primary role in executing policy enacted by local school boards and are essential to each district’s success, which underscores the importance of participating in these local elections.

In a local vote, 61% of residents in Montgomery County voted to increase their investment in Montgomery Public Schools. The school district had been previously funded at the state-required minimum of 10 mills of property tax. Now, the district will be funded at 22 mills, providing an additional $33 million in local dollars for schools beginning in 2023. For context, neighboring Pike Road City Schools are funded at 31 mills and Auburn City is at 24 mills.

This increased investment in schools in our state’s capital will help provide students and teachers more of the resources they need to succeed.

Tuesday’s election results are not the end, but rather serve as a prelude to the 2021 legislative session, where many important educational policy issues will be made, such as literacy, math, teacher recruitment and retention, and more. A+ Education Partnership will be working tirelessly to keep you informed and engaged as these decisions are made. Follow along with us on Facebook, Twitter, Instagram, or LinkedIn. We will also continue sending our weekly education news round-up, The Gist, every Friday morning with updates from the previous week. Click here to sign up.

0 Comments on "Education on the Ballot: Alabama’s Results Explained"