What do all the following quotes have in common?

“Lift up your spirits by lifting up your vision.”

“Learning has virtually disappeared because people don’t have time to think.”

“All of our work is based on a desire to contribute.”

“Insane leadership is treating everyone as a non-living being (people as numbers that can be managed).”

“Sane leadership is the unshakable confidence that people can be generous, creative and kind.”

“We have to start paying attention to exquisite relationships.”

All six quotes were part of Margaret Wheatley’s keynote at the 2018 Learning Forward Conference in early December. 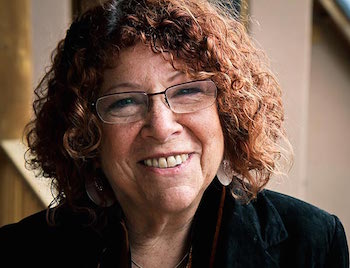 Wheatley, known to friends and colleagues as Meg, started her advocacy and discernment work in the mid-1960s when she served as a Peace Corp volunteer in Korea. Since that time, she has been a speaker, teacher, consultant, advisor, and formal leader and author of nine books, many of which I have devoured.

In 2014, Wheatley received the Lifetime Achievement Award from the International Leadership Association, which cited her seminal 1992 book Leadership and the New Science as shifting the entire field of leadership development. (You can read her more formal bio here.)

Meg Wheatley was one of the main reasons I decided to attend the conference this year. I wanted to hear her voice and be renewed — to reaffirm my belief that the world was still mostly good and the future promising.

Well – as the dissonance created by the quotes above suggest – I didn’t leave with that affirmation. What Meg Wheatley shared was much more of a mixed message about the future of American society, but it’s an important message for all of us who work for good to hear.

Wheatley’s remarks were centered around her newest book, Who Do We Choose to Be? Facing Reality, Claiming Leadership, Restoring Sanity (Barrett-Koehler Publishers, 2017), which I purchased at the conference.

To set the framework for her talk, Wheatley referred to Gandhi’s Seven Deadly Sins, pointing to the decline of a civilization:

Listening to her recap these sins, the Learning Forward audience began to shift uncomfortably in their seats. For many of us, I suspect, some of these “sins” sounded too close to home.

The Age of Decadence

And Wheatley didn’t stop there. She pointed to the long train of human history. She called upon the work of Sir John Glubb to illustrate that all civilizations move through the same lifecycles, regardless of their location, timing, or how they exercised power. These cycles as described by Glubb are:

Wheatley suggested that America—and several other countries—have entered the Age of Decadence where politics are corrupt, the gap between the haves and have-nots has increased and where a celebrity culture has taken hold, elevating athletes, singers, and actors. This age is characterized by the belief in a nation’s “eternal greatness…[allowing] an increasing part of their time in leisure, amusement or sport”(p. 303).

The final stage, Religion, occurs only after “the empire has fallen, when money no longer rules everything, [and] religion regains its sway and a new era begins. But only after the fall” (p. 304).

You could hear a pin drop in the room as Wheatley recounted these stages and the implications. 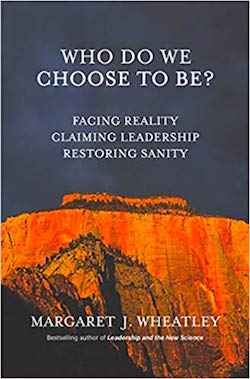 Fortunately, Wheatley didn’t end her presentation there. Instead, she helped us understand that there is indeed still hope. The hope doesn’t lie in systemic change, for which (she argues) the time has past, but rather it is hope that hinges on individuals creating metaphorical “Islands of Sanity.”

Islands of Sanity are based on Wheatley’s firm belief that “it is possible for leaders to use their power and influence, their insight and compassion, to lead people back to an understanding of who we are as human beings, to create the conditions for our basic human qualities of generosity, contribution, community and love to be evoked no matter what” (p. 8).

These “islands” are based on two of Wheatley’s fundamental concepts: (1) “Whatever the problem, community is the answer, “ and (2) “Humans can get through anything as long as we’re together.”

To make our role even clearer, she called up the words of Teddy Roosevelt: “Do what you can with what you have and who you are.” In other words, do the work because it is good, not to be praised, realizing that we cannot NOT do this work.

The Gift of Meaningful Work

Instead of fixating on our differences or blaming others for our problems, we should simply expand our work within our islands—our networks or centers of influence. And in doing this, we’ll make mistakes and experience some setbacks. Wheatley suggests we embrace that fact: fail fast and often and learn from experience.

Part of our “island” work involves reclaiming conversations and making time to talk and listen to each other. Wheatley believes cell phones and social media must be set aside—at least for parts of the day—to enable us to have the type of conversations we used to have on front porches and around the dinner table.

Listening, conflict resolution, and problem solving skills are vital to our islands. Wheatley encourages us to be mindful of these important skills that she labels “restorative.” “They are processes that reawaken our powers of cognition, reinstitute thinking, and redirect our attention to one another” (p. 198).

And, when things to wrong, we need to begin to talk with each other by asking this simple question: “What just happened here?”  – understanding that everyone will have a different perspective. Listening and seeking understanding will enrich relationships and strengthen our “islands.”

What Do You Want to be Remembered For?

At the end of her new book, Wheatley speaks to our legacy by asking “what do you want to be remembered for?”

I believe you know the answer to this question and if not, think again about those who willingly offered you their shoulders. Perhaps they didn’t know that for all these years you’ve relied on their example and taken strength from them. Probably they have no idea of how often you think of them, how you view their lives now that you’re older. I expect they’d be shocked to learn that they’ve served this role in your life, that they left a legacy (p. 285).

It’s time for us to offer our shoulders to others by inviting them to our “island” or, if they are already “there,” by intentionally strengthening our relationships. We can lift our spirits by lifting up our vision, which will enable us to preserve what we value most: good work, friendship, and serving others.

I love this quote from Meg Wheatley because it applies so perfectly to our work together, in our classrooms, our schools, and our networks: “There is no power for change greater than a community discovering what it cares about.”

► A similar keynote by Meg Wheatley can be viewed here: https://www.youtube.com/watch?v=LtaYNxp56gs

► A shorter version (where she describes islands of sanity – at about 5:50 mins. into the video). https://www.youtube.com/watch?v=Np14wDSABYw

0 Comments on "Who Do We Choose to Be? Meg Wheatley on Facing Reality and Claiming Leadership"