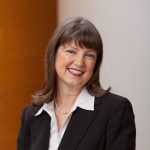 As Debbie Long approaches retirement this summer from Protective Life Corp., her extraordinary career and community leadership have caught the attention of Yellowhammer News, a conservative, Alabama-centered news organization that, according to its own description, “promotes and protects what we love – Alabama, and the people and culture that make her great.”

Debbie has served on the A+ Education Partnership Board of Directors since 2010, and has been very active leading the organization’s annual priorities and organizational growth and success.

She graduated from the University of Alabama School of Law in 1980, and went on to become a very successful attorney, and “one of Alabama’s highest-paid female executives,” according to Yellowhammer. She worked primarily as a corporate lawyer in Birmingham, helping to found the firm of Maynard, Cooper and Gale before moving to Protective Life Corp.

She has been with Protective Life Corp. since 1992, serving as its general counsel, the executive vice president, chief legal officer and corporate secretary. Currently she is serving in a part-time advisory position.

She has served as chairwoman of the Business Council of Alabama’s Judicial and Legal Reform Committee and also has worked on the Tax and Fiscal Policy Committee, the Federal Affairs Committee and on the board of ProgressPAC — the lobby’s political action committee.

Last year, the BCA honored her with the Robert W. “Bubba” Lee Political Courage Award, given each year to someone who is willing to take the right position regardless of cost.

Here is the full article:

0 Comments on "A+ Board Member, Debbie Long, Named 2018 Yellowhammer Woman of Impact"