Alabama is having a crisis of confidence in the ACT Aspire, and it’s unclear whether it’s warranted. 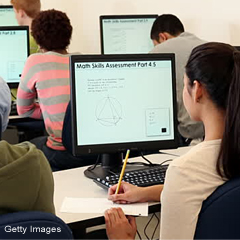 At the February State Board of Education work session, Superintendent Michael Sentence explained that the Alabama State Department of Education (ALSDE) has been asked by the U.S. Department of Education (USDOE) to prove the ACT Aspire is aligned to the state’s College and Career Ready Standards (CCRS). This followed a January letter from the USDOE stating that evidence offered by the ALSDE only proved the test “partially meets requirements” for alignment in reading, math and science; it asked for further documentation of alignment.

Notably, the USDOE’s letter does not say the ACT Aspire is NOT aligned to Alabama’s standards. It asks the ALSDE to provide further proof. This is far different from the test not being aligned, and Sentence was clear about this. However, the world of Alabama education policy is rarely tame. Both standards and tests are hot-button topics, and the news left State Board of Education members, administrators, teachers, parents, and students questioning whether the ACT Aspire: A) is aligned to the standards, and B) will even be given this spring.

This crisis of confidence in the ACT Aspire, whether warranted or not, might be headed to an alarming ending. Under federal law, Alabama is required to give the ACT Aspire this spring with at least 95% of students participating to avoid jeopardizing its Title I funding. But, with some Alabamians saying the test doesn’t matter or shouldn’t be given at all, it’s unclear whether Alabama will hit the 95% mark.

This could be a recipe for disaster that won’t benefit students. The potential loss of Title I funding is real. For this reason, and more importantly for the continued ability to inform instruction, Alabama students should take the exam as planned this spring.

Further, the ACT Aspire still has value in comparability. In the past, before the ACT Aspire and before the old Alabama Reading and Math Test (ARMT), Alabama used the Stanford Achievement Test, which was not aligned to Alabama’s academic standards but provided information on students’ and schools comparable academic standing. Currently, the National Assessment of Education Progress (NAEP), given nationwide every two years, is intentionally not aligned to any one set of standards, and it’s used just for comparability of one state to another.

Consequently, even if the ACT Aspire turns out to not be aligned to our standards, the three years of scores Alabama has (and fourth that will come from this year’s test) still provide comparable data on schools and districts in Alabama, because all the students took the same test.

The scores may be lower than many would like them to be, but as the state began growing into its higher academic standards in 2012, more rigorous tests were needed than the ARMT. In fact, while it may be difficult to see the change in test scores from the old ARMT, Alabama has been praised for closing its “Honesty Gap” and telling parents the truth about where their children stand academically.

The first step in moving forward with the USDOE is for the ALSDE to provide an independent third party review of the ACT Aspire’s alignment to Alabama’s standards. That review may exist, or it may need to be conducted.

To date, there are at least three public independent studies of the ACT Aspire. Two look directly at alignment: one by the Thomas B. Fordham Institute for grades 5-8 and one by the Human Resources Research Organization for the high school assessments measure alignment. A third by the American Institutes for Research examined achievement standards on different tests. The studies compared the ACT Aspire to the Smarter Balanced and PARCC assessments that were developed by consortia of states to align directly to the Common Core State Standards.

The Alliance for Excellent Education wrote a good summary of the research after the reports came out:

Short summaries of the studies–and responses from ACT and Smarter Balanced–can be found here:

Beyond an alignment study, the USDOE’s letter asks for a list of items to prove alignment. None of it appears to be unreasonable, and we hope ALSDE will cooperate and provide that information.

Alabama’s future decisions on the ACT Aspire will have a tremendous impact on children, and that issue is worthy of cool-headed consideration and study. Other states nationwide have dealt with similar issues and debated on ways to better meet the needs of students. In the meantime, the ACT Aspire is what we have, and whether or not we like the results, it provides meaningful feedback to Alabama’s education community about where students stand.