Imagine taking a walk with a friend along a slow-flowing stream. It’s spring, the weather is perfect, and there is not a cloud in the sky. A perfect day and a perfect walk. Until you hear a scream and see a child floating down the river. You immediately jump into the water and rescue the child, only to see another one floating behind her.

You look to your companion for help, but she is running up the bank looking upstream. You scream, “Help, come back! What are you doing?”

Her response? “I’m running upstream to see who is throwing these children in the river.” 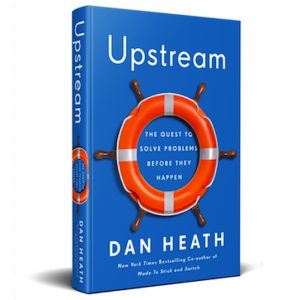 That parable became the impetus for Dan Heath’s book, Upstream: The Quest to Solve Problems Before They Happen. Drawing on his interviews with hundreds of unconventional problem solvers, Heath defines upstream efforts as “those intended to prevent problems before they happen, or alternatively to systematically reduce the harm caused by those problems” (p. 6).

Because we think education could benefit from more upstream thinking, the Alabama Best Practices Center developed an online book study using Upstream as the guiding text. The study (one of the PLU Book Studies we host each year) is divided into three parts and features a series of asynchronous and synchronous sessions to introduce participants to the concepts and provide networking opportunities to deepen their learning and collectively problem-solve. (Here’a short video explaining how it works.)

We’ve just concluded the first part of our deep dive into upstream thinking, which introduces the concept and surfaces three barriers to developing this anticipatory mindset:

1. An Attachment to Problem Solving

2. A Lack of Willingness to Own the Problem

Our participants’ comments have been particularly insightful and they’ve prompted me to share some of our discussion here, at the “midstream” point in our learning together. As you peruse their observations, feel free to join in the conversation by leaving comments below. You might also want to respond to the prompt I’ve included at the end of this post!

Guiding Q: Upstream thinking makes a lot of common sense. Why is it not more prevalent?

► “I think that it’s easier to focus on what needs to be done right now, instead of think ahead. The planning for upstream can seem daunting and as humans we tend to want to take the easier route with the quickest results.”

► “While upstream efforts are indeed common-sense efforts, there are numerous reasons we take the problem-solving approach rather than the problem-prevention approach. I think one of the biggest reasons is that we are drowning in our reactive measures to the point that we can’t catch our breath long enough to prevent the issue from occurring in the first place. I believe another reason is the “do what we have always done” mentality.”

Guiding Q: What is Problem Blindness and how is it a barrier to Upstream efforts?

Heath reminds us that “if we don’t see a problem, we can’t solve it” (p. 23). To explain problem blindness, he turns to the Chicago public school system. In 1998, only 52% of their students graduated. Heath frames his story with the shrewd observation that “every system is perfectly designed to get the results it gets.”

Many Chicago educators and city leaders thought this high drop-out rate was inevitable and caused by students living in poverty and the related social problems affecting schools. Sadly, there was also the widely held belief that it was students who needed to solve the problem by being more responsible, and parents should be more responsible as well.

Fortunately, Heath notes, a few leaders of the system decided to own the problem and started looking at the data. They turned to research conducted by the University of Chicago Consortium on School Research, which developed a model to predict which ninth-graders would graduate and which would drop out. And their model proved to be 80% accurate!

Chicago leaders created a “Freshman On Track” program focused on the ninth-grade year (well upstream of graduation) and guided by two specific factors: (1) Students successfully earning five full-year course credits and (2) Students not failing more than one semester of a core subject course. Programs were put in place, teachers’ mindsets were altered, and support systems for students were implemented. The result? By 2018, the graduation rate had increased to 78%. While more needs to be done to improve that percentage, it is a far cry from the 52% figure earlier. (p. 24)

► This story resonated with the book study participants. With the concept of extra social-emotional support in mind, they added an additional guiding question: “In what ways can we use upstreaming thinking to respond to the mental health needs of our students, teachers, and parents?”

Guiding Q: How does lack of ownership blunt upstream thinking?

Have you ever looked at a problem and wondered when someone was going to do something about it? According to Dan Heath, that’s a form of lack of ownership. He adds, “What’s odd about upstream work is that, despite the enormous stake, it’s often optional” (p. 41). One of the main reasons upstream efforts don’t occur is because the people don’t believe they have the legitimacy to get involved or that they will be held accountable for failing to take upstream action. (p. 43).

Book study participants connected this concept to the ongoing discussions in education about a lack of individual and collective efficacy. They noted that pandemic-related issues also had a negative impact on the willingness of educators, students, and parents to own an issue. 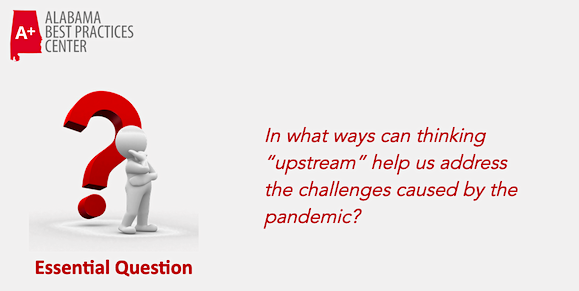 Guiding Q: What is tunneling and in what ways does it come into play?

According to Heath, tunneling occurs when “people are juggling a lot of problems (and) they give up trying to solve them all. They adopt tunnel vision. There’s no long-term planning; there’s no strategic prioritization of issues” (p. 59). This kind of tunneling can be self-perpetuating, he says.

Our participants noted they sometimes found themselves moving away from strategic planning or intended actions to solve problems when they felt overwhelmed by deadlines or pandemic-related issues. Instead of thinking upstream, they became reactive and responded to whatever was in front of them, even if it wasn’t the most important.

► “I find myself tunneling when I’m feeling overwhelmed and have so many issues on my plate. It is sometimes hard to find an entry point and move into a problem-prevention mindset. I watch this happen with colleagues as well. We choose the problem we feel best equipped to solve regardless of how necessary or impactful it might be.”

Next Step: Identifying an Issue of Our Own

As the book study continues, participants will identify an issue in their own work that requires upstream thinking. To begin addressing that issue, they’ll consider the seven questions Dan Heath poses for Upstream leaders:

Stay tuned. I’m learning so much from the insights of our book study participants. Please join the conversation by commenting on this blog. You might choose one or more of these prompts:

To learn more about Dan Heath’s book and access several free resources, visit the Upstream page at the Heath Brothers website. You can order the book at Amazon or your favorite bookseller. Dan, by the way, is a senior fellow at Duke University’s CASE center, which supports entrepreneurs fighting for social good.