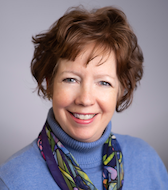 The book about personal and professional growth we’re highlighting today is 14 years old. In our full-speed-ahead society, that seems like forever, doesn’t it?

You may wonder how any advice shaped for a 2007 audience could be meaningful after a decade and a half marked by a great recession, filled with political strife and disunion, and capped by a pandemic event that has shaken our communities and our schools in such profound ways.

The short answer is: It’s a book about human nature and our tendency to blame and even vilify others who don’t agree with us or try to point out our shortcomings. The need to understand the scientific and psychological roots of this all-too-familiar behavior may be more urgent today than ever before. 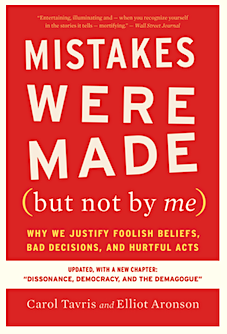 The book, now in its third edition, is Mistakes Were Made (but Not by Me): Why We Justify Foolish Beliefs, Bad Decisions, and Hurtful Acts, written by two eminent social psychologists, Carol Tavris and Elliot Aronson, who  “brilliantly illuminate the fallacies that underlie irrational behavior” (Scientific American) in a “down-to-earth, commonsensical tone” (Oprah Magazine).

Mistakes Were Made presents itself as a tool to help identify and correct this sort of behavior in ourselves and others. Judging from its continuing popularity and impact (Adam Grant says it’s one of his 10 favorite books), the insight and advice it shares can help us approach our life and work with a more positive outlook and a greater potential to help unify and heal.

Here are three excerpts (with some trims and tweaks) from a summary of the book shared recently at the Next Big Idea Club website. We’ve put a link at the end of our post so you can read the complete summary for yourself.

► The means aren’t only justified at the end.

Small decisions to ignore acts that feel unethical to us or go along with the wrong decisions of others by justifying them as necessary at the moment can set us on a path toward moral dispair, the authors say.

“Having wrestled with a decision and justified it, we unconsciously commit ourselves to certain behaviors in the future, good or bad.”

When you justify your small decisions, good or bad, you start down a road that can be hard to get off of. For example, a law student may convince himself that it’s OK to cheat on the bar exam by telling himself, “I know the law, I’m just not a good test-taker.” Having justified cheating once will make it easier for him to take similar shortcuts later in his career.

In the same way, a student who has the opportunity to cheat—and chooses not to—can lock in a distaste for dishonesty. Having wrestled with a decision and justified it, we unconsciously commit ourselves to certain behaviors in the future, in this case for good.

► To fight bias, acknowledge it.

“Objects are closer than they appear” is a warning you’ve probably seen on a car’s side mirror, and it’s a good reminder that perception is not the same as reality. In fact, the same caution should be applied everywhere. Things are not as they seem to us, because we all have biases and blind spots. Pretending that we don’t can get us in trouble.

Psychologists talk about a phenomenon called naive realism. It’s our tendency to think we see the world with perfect clarity—that our ideas and beliefs are inherently reasonable, and that open-minded and fair people will agree with us.

But naive realism only makes it easier for groups to become entrenched in their mindset. If a group believes only they hold reasonable ideas, then the only people who would disagree are those who are unreasonable. Rather than making us more open-minded, naive realism encourages us to double down on our biases, and strengthens our tendency to think in adversarial terms about those who are different, especially during times of economic or social distress.

For example, in some Western countries, fear of COVID-19 increased the animosity expressed toward Chinese people and others of Asian descent. Not every prejudiced person commits overt discrimination, of course, but the more others in the community agree with that bias, the more emboldened a prejudiced person will become in his viewpoint.

So how can we combat our naive realism and root out our biases? One way is to cultivate a wide social circle with diverse points of view. Surround yourself with people who challenge your ideas and hold you accountable for inaccurate or harmful notions.

► Respect comes to those who fess up.

Self-justification isn’t always bad. As Tavris and Aronson point out, it can be a healthy way to reduce the mental anguish that comes with learning you made a mistake. But it takes a lot of energy to protect your ego in this way, and sometimes it’s less painful to simply own up to the mistake.

Taking responsibility for missteps isn’t easy, but when done correctly, it can be an act of healing, and can even earn you respect and credibility. Leaders who are willing to accept blame and correct their mistakes are generally viewed as more trustworthy and capable of command.

Of course, when you admit responsibility and apologize for your actions, there are no guarantees it will be taken the way you want. People who don’t like you may see your apology as a sign of weakness, or they may consider it false or forced. But a sincere apology that avoids displacing blame or making excuses has the potential to sway those who have been wronged, and give you peace of mind.

“Leaders who are willing to accept blame and correct their mistakes,” the authors note, “are generally viewed as more trustworthy and capable of command.”

✻ Read more key findings from Mistakes Were Made in this summary article at the Next Big Idea Club website.

✻ Read highlights about the book at Wikipedia.

Cathy Gassenheimer is Executive Vice President of the Alabama Best Practices Center. John Norton is a communications consultant and editor of the ABPC Blog.