Gossip – or as I like to call it, “back-channel conversation” – is bad, right? Well, not always, according to a recent study featured in USA Today.

Researchers at the University of California-Riverside report that people gossip almost an hour a day. And all that gossip is not necessarily trivial or unhelpful. “We actually found that the overwhelming majority of gossip was neutral,” psychologist and study co-author Megan Robbins, told NPR.

In fact, the study found that only 15% of that “gossiping time” was negative. Most gossip tended to be about social information, such as movie stars, politicians, sports and social media. Not surprisingly, extroverts tended to gossip more than introverts. 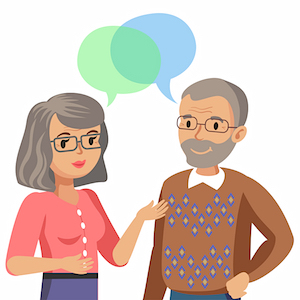 According to an article in Psychology Today, “gossip can actually be thought of not as a character flaw, but as a highly evolved social skill. Those who can’t do it well often have difficulty maintaining relationships, and can find themselves on the outside looking in.” Why? Sharing harmless secrets help people bond and can expand our social networks.

The article also found another positive: “Gossip also helps to socialize newcomers into groups by resolving ambiguity about group norms and values. In other words, listening to the judgments that people make about the behavior of others helps the newbie figure out what’s acceptable and what isn’t” in a particular context or community.

In spite of these findings. I’m still a bit wary of gossip. Why is it that we find it easier to say negative things about people behind their backs? Most likely, we are angry, hesitant, or afraid of what might happen if we confronted that person. Perhaps we think that by using a back-channel conversation, we are making friends, strengthening our own reputation, or making ourselves feel better. Maybe we think we’re sending an indirect message. In worse cases, perhaps we are intentionally trying to damage that person’s reputation.

When those types of thoughts come to mind, we always ought to ask ourselves, “Will what I’m getting ready to say be hurtful or helpful?” If you believe it is hurtful, think again. Take some time to analyze your own feelings. In many cases, it might be that the person you really need to talk to is the one about whom you are getting ready to gossip.

When feeling the urge to gossip let me suggest a few unscientifically tested tips:

So, the next time you feel like saying something about someone not present, think about those tips. Maybe you’ll avoid saying something you can’t take back. Or maybe you’ll say what you’re thinking and – especially when you pass it along – make someone’s day!

“I was just telling Andrea about your terrific strategy to engage your students on those tough Friday afternoons. We should share it at our next team meeting!”

Cathy Gassenheimer is Executive Vice President of the Alabama Best Practices Center, a program of A+ Education Partnership.

0 Comments on "Could Gossip Be a Good Thing?"